Sweet Potatoes on Mars? How this Superfood Could Have Saved Matt Damon

My wife asked me to Netflix and Chill the other night. Now, before everyone gets ahead of themselves, for married folk that means debating about what to watch for an hour and falling asleep halfway through the movie. My wife loves Matt Damon. Luckily, my wife has never met him, and so we ended up watching The Martian. To give you a brief synopsis- he is an astronaut/botanist in the not so distant future who gets left on Mars and survives over a year by growing his own white potato crop. Since I am not entranced in Matt Damon’s looks I was able to let my mind wonder about how I could have improved his situation up there. Now, I am not advocating for putting a 30-year-old underachiever, like myself, on NASA’s team, but I bet I could have improved the astronaut’s life expectancy by replacing white potatoes with sweet potatoes. Here are 4 ways sweet potatoes could have saved Matt Damon’s life on Mars. 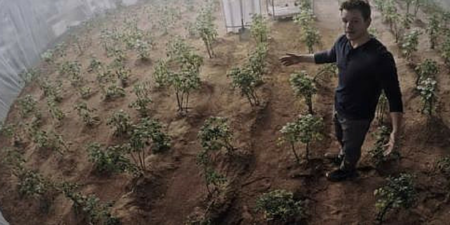 Space causes the human body to produce fewer red blood cells, which leads to fatigue, dizziness, and overall low energy levels. Iron in food helps the body produce blood cells at a higher rate and sweet potatoes contain more iron than white potatoes. Substituting sweet potatoes would have contributed to higher energy levels and brain function, allowing Mr. Damon to avoid blowing up his decompression chamber. If he had not blown up his decompression chamber, he still would have had his potato crop, reducing the need for rationing his food supply.

In the movie, NASA’s public relations director wanted him to take a selfie, while he was on Mars. Matt Damon ended up taking an unflattering picture of himself that was not shown to the public.

Sweet Potatoes contain around 1,000 times more Vitamin A than regular potatoes. Vitamin A promotes healthy eyes and skin. Even though Mars is closer to the sun, the atmosphere does not allow for sun bathing, decreasing Matt Damon’s intake of vitamin A. Without a consistent source of Vitamin A, Mr. Damon’s character would have dry, rough skin as well as corneal inflation making him look less attractive. Eating sweet potatoes would have supplied him with enough Vitamin A to easily be portrayed as “attractive”. If he had a more attractive appearance, NASA would have shown his selfie to the public, which would have garnered more sympathy for his cause.

Side Note: Luckily the director didn’t realize that Vitamin A is essential for the reproductive process too or there could have been Alien Matt Damon babies.

To the amazement of my wife, Matt Damon took off his shirt to reveal some pretty nasty wounds and of course a six pack. Vitamin C is crucial for healing wounds. Sweet potatoes contain more Vitamin C. If his diet consisted of sweet potatoes rather than regular potatoes, his wounds would have healed faster.

There is a scene in the movie where Matt Damon runs out of ketchup and turns to dipping his potatoes in Vicodin. While I have never tried Vicodin dipped sweet potatoes, I know they cannot be good for you. Luckily sweet potatoes simply taste better than regular potatoes and can be mixed with other condiments. The versatility of the sweet potato would be a huge morale boost to someone stuck on Mars.